TORONTO, Oct. 18, 2022 /CNW/ – Laramide Resources Ltd. ("Laramide" or the "Company") is pleased to announce that the second phase of the 2022 drill program at its Westmoreland Uranium Project in Queensland, Australia ("Westmoreland") is now underway. This phase of the program (as initially outlined in Laramide’s news release of May 25, 2022), will focus on a potential satellite deposit known as Longpocket (including the Sue / Outcamp prospects) which saw limited drilling in 2010 but was never included in the overall resource at Westmoreland.

The Outcamp and Sue Uranium prospects are located 8km to the East of the Junnagunna Uranium deposit and 12km Northeast of Redtree (see map at Fig. 1) and the current drilling will target Outcamp, with a goal of extending the envelope of known uranium mineralisation to the northeast, building on a 2010 drilling program, which confirmed mineralisation as shallow and flat-lying in nature.

The current drilling program will consist of up to a dozen or more diamond drill holes on a truck mounted rig and is expected to conclude by late October before the onset of the traditional wet season.

The Company can also report that the drilling program to test the prospective Amphitheatre prospect was successfully completed in early July, which was somewhat slower than the originally anticipated timeline due to equipment and logistical constraints.  Core cutting and sampling preparation were similarly impacted but the samples were shipped in late August  to ALS Global Lab in Mount Isa and are expected to be processed in the coming weeks. 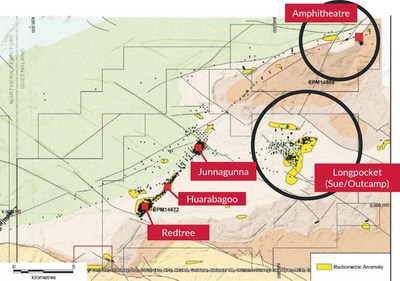 Laramide is engaged in the exploration and development of high-quality uranium assets. Its wholly owned uranium assets are in Australia and the United States. Each of Laramide’s portfolio of five advanced uranium projects have been chosen for their production potential. Laramide’s Westmoreland project, in Queensland, Australia, is one of the largest projects currently held by a junior mining company. Its U.S. assets include Churchrock/Crownpoint, a large ISR project, and the La Jara Mesa in the historic Grants, New Mexico mining district.